PRINTERS ALLEY, tucked between Third and Fourth Avenues stretching from Union to Church Streets, got its name from an early connection to Nashville’s once-bustling printing industry.
As late as the 1960s, Nashville was home to more than 36 printing companies and plenty of other businesses supporting the trade—many which were located in or near the Alley.

Besides its role as a printing hub, the Alley also became the heart of the city’s nightlife, catering to the hotels, restaurants and saloons fronting Fourth Avenue, which in the late nineteenth century became known as the Men’s Quarter.

Many cafes, saloons, gambling halls, speakeasies and clubs—including the famed Climax Club—sprang up to cater to the men of Nashville’s print shops as well as judges, lawyers, politicians and other members of the city’s elite.

It didn’t matter what you were looking for, you could find it in Printer’s Alley (Nashville’s dirty little secret). The city’s politicians and police protected the Alley even after the sale of liquor was outlawed in 1909. Hilary Howse, Nashville’s mayor at the time was asked by reporters if he protected the Alley’s establishments. “Protect them?” he answered. “ I do better than that, I patronize them.”

In 1939, Nashville repealed Prohibition and for the next 30 years, the Alley flourished. Although liquor was legal, you could not buy it by the drink. Enter the mixing bar: Patrons were encouraged to bring their own bottles then bartenders would mix their drinks for them. The movers and shakers of the day kept their bottles in lockers or on shelves behind their favorite bar for safekeeping. 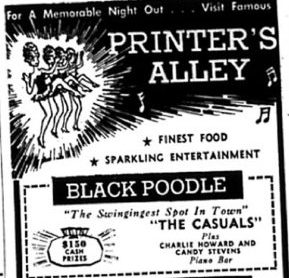 Of course it wasn’t all about booze. In the 1940s, the Alley’s nightclubs became a showcase for performers such as Boots Randolph, Chet Atkins, Waylon Jennings, Hank Williams and Dottie West. In the 1970s, current and up and coming stars – from Paul McCartney to Jimi Hendrix—hit the small stages. More recently, stars such as Rascal Flatts and Tim McGraw kicked off their careers in the Alley and to this day, you never know who you might see taking in a show (Steven Tyler, Gretchen Wilson) or hopping onstage for an impromptu jam (Delbert McClinton, John Legend).

The printers are long gone. But the ambiance, the flair and the history remain.