With its live music and live nudes, Printers Alley has a history and reputation that’s plenty lively.

But what’s it like to actually live in Printers Alley?

Only a few really know. But anyone can find out on Sunday when Gary Bowie and Melody Malloy open their ornate and quirky alley home — inside the three-story, 15,000-square-foot 1890s building they restored — as part the Downtown Home Tour.

The glimpse into a lesser-known side of the alley comes at a time of great change for the historic entertainment district, where longtime attractions have closed — or been resurrected — and a burst of investment will bring the first new developments in years, including a 160-room boutique hotel.

The Downtown Partnership’s annual tour of homes, which has included lavish high-rise condos in the past, focuses on historic and rehabilitated living spaces this year. 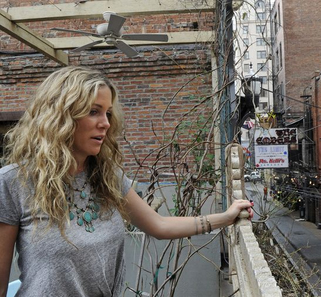 Printers Alley over the years

Malloy and Bowie said they’re opening the home in part to prove a point about downtown life.

“Especially,” Malloy said, “if you get a lot of locals who don’t think about living downtown.”

“There is a community thing. I know all of my neighbors better than I ever did in Belle Meade.”

Yet for its size — stretching back the length of half a city block — the home hardly registers amid the alley’s neon glow and wrought-iron balconies.

Behind its unassuming garage doors is what Malloy jokes is Pee Wee’s Playhouse come to life, nestled into the alley that she calls “Sesame Street for adults.”

Opened in 1890 and partially destroyed by a deadly fire two years later, the home basks in history. Herschel Greer, pivotal in Nashville baseball history, owned it briefly. And legendary city lawyer Jack Norman made it his office for decades, playing host to international celebrities.

“No one had lived here, but this building has amazing energy.”

The main living space is on the second floor. On the alley end, a porch overlooks Bourbon Street Blues and Boogie Bar.

Art, sculptures, guitars, a hat collection and a vintage pinball machine are among the treasures adorning the exposed-brick interior. In the shotgun-style space, a fully stocked pocket bar flaunts Printers Alley memorabilia. And the alley’s former hand-painted sign hangs in the hallway.

Odes to history — like bathtubs in the bedroom — interplay with contemporary pizzazz.

And that’s just the main floor.

Downstairs, the couple and frequent guests enjoy a plush home theater and a series of themed bedrooms. The attention to detail must be seen to be believed. On the home tour, that’s possible.

The attention to detail must be seen to be believed. On the home tour, that’s possible.

About 1,000 people could come through on Sunday, giving Bowie and Malloy the additional opportunity to talk about the future of the alley.

They say they’ve heard too many times that all of Printers Alley will be torn down, a rumor circulating from taxi drivers to tourists. But while the Fiddle & Steel Guitar Bar closed and Lonnie’s Western Room is relocating, some of the new development promises to be mindful of what’s already there.

Bowie said some places can’t be replaced. But he’s trying to guide the alley’s future, not stand idly by, as owner of several historic properties.

“Progress is part of what we have to live with,” he said. “I’ve seen this grow. At the end of the day they might have a special place — if they respect the historical integrity.”

For Malloy, the preservation plus the energy makes for the combination she wants in a neighborhood. And she likes the convenience of being walking distance to most of what she needs.

That’s what she said she’ll talk up with the homegazers — some finer points of the alley that could go overlooked amid the grit and glitz.